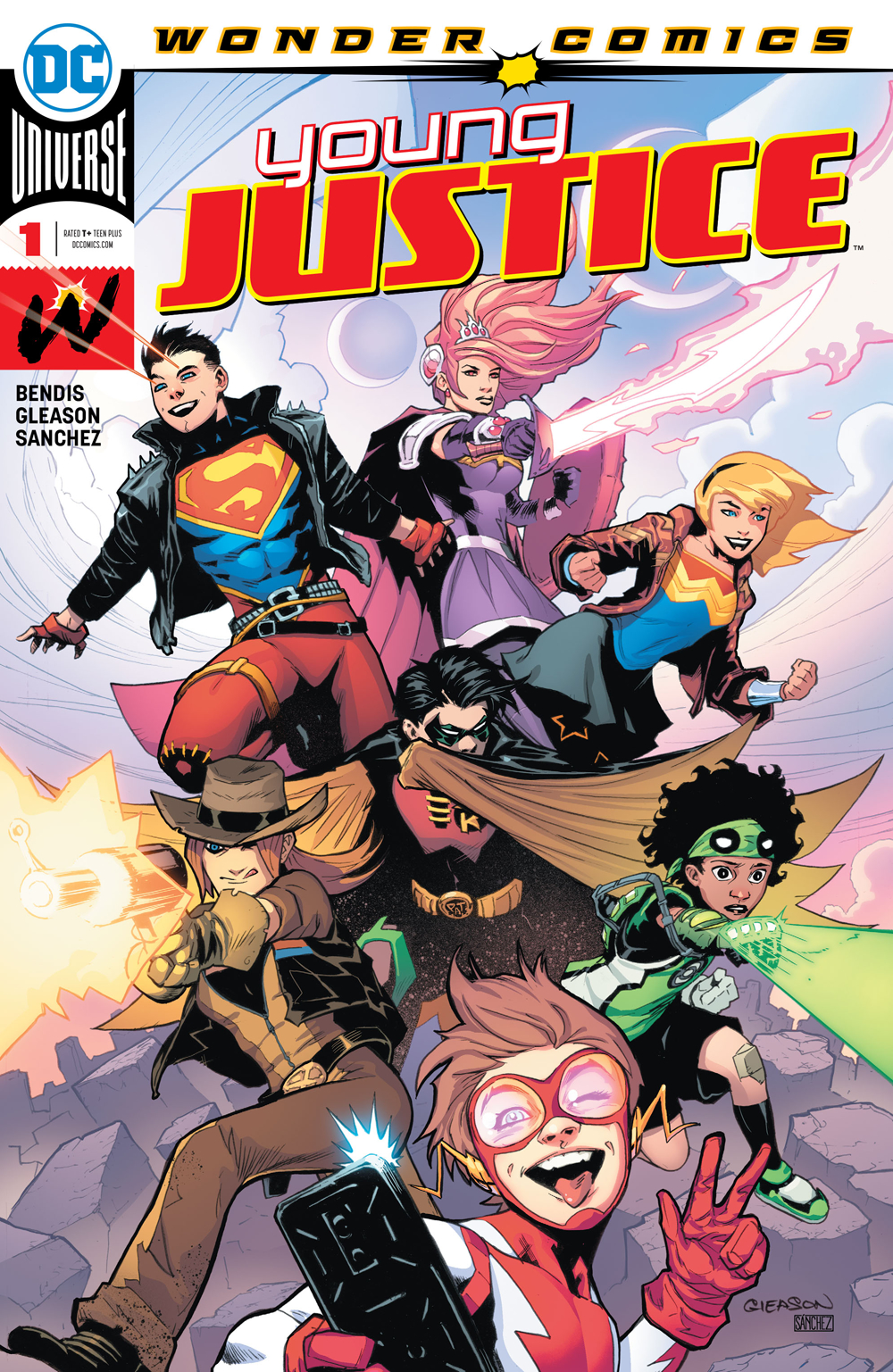 I have to warn you, I wasn’t expecting much from this book. Seriously. My concern with comics lately is that the publishers have been dialing it down too much to hook a younger audience. It was one thing to have comics for the li’l guys. We all have to start somewhere, right? The primary issue is that while I was growing up, comics as a whole were keeping pace, maturing as I was [supposed to].

Then we hit a wall and comics started going backwards again. The players were getting younger, more & more juvenile versions of established characters popped on the scene, and our familiar roster of characters devolved into sophomoric shells of the heroes we knew. Come to think of it, the phenomenon was not really mirrored on the villainous side of the line. At any rate, this would not be such a problem so long as I still had my chunk of comics and the munchkins had theirs.

Then came the solicitation for Young Justice and Wonder Comics as a whole. Great. One more line for the kids; one smaller slice of the comic rack for me.

DC has such a rich history that trying to find a place to start can be a daunting task. Bendis addresses this on page one, informing the reader that there is an Earth, that there have been multiple Crisis-type event occurrences, and there are people that are displeased with the upset of the status quo.

And then we are dropped in Metropolis to meet a brand new character: Jinny Hex. Her first interaction with the locals is delightful and you can’t not read her dialogue without that lovely Texas twang. Helps if you’re from here, y’know? But Metropolis being Metropolis, it does not take long for the proverbial defecation to hit the oscillation. A breach brings a host of extradimensional entities from Gemworld and they have a definite agenda.

Springing into action, Bendis does what Bendis does best: amazing dialogue in the face of chaos. Robin (well, one of them) arrives on the scene to help out, along with Wonder Girl, Kid Flash (as Impulse), and newcomer Teen Lantern.

What Bendis does for the next quarter of the book is formulaic, but that does not diminish it’s entertainment value. Fans of the Marvel title New Avengers (the one from the Civil War era) will recognize the team development portion of the book. Everyone’s here… destiny… missing piece… It goes back to the creation of the original Avengers team. Kid Flash finds his purpose in driving the narrative of the book in the most hilarious display of hyperactive shenanigans seen in a long time.

Side note: this book is further solidifying my suspicion that Marvel & DC are slowly priming the fanboy pump for another crossover event by peppering references to the other team’s properties. Apparently Metropolis is on the way to Ottawa or British Columbia as Kid Flash was on his way to join Alpha [Flight?] in Canada. Then again, isn’t everything on the way to everywhere for a speedster?

The story ends with another interdimensional trip, the introduction of two more characters (one familiar, one not), and the beginnings of what may be a truly fantastic beard on the reality-smashing Conner Kent (Superboy)!

Young Justice #1 found a way to bridge the ever-expanding gap between young readers and seasoned fans. This book was a winner when it was unmanicured lines in a preview. The refined art and playful uses of light and depth bring together a team of highly energetic and familiar players to a battlefield that we may have forgotten could still be fun – a refreshing, action-packed bath of chaos and beauty.

Whether you are a child picking up her first comic book, a YA reader, or a comics veteran, you are in for a fantastically substantive ride with Bendis’ DC imprint: Wonder Comics! Young Justice is just the first book to come out of this idea machine. Coming up are Naomi, Wonder Twins, and Dial H for Hero. Look for this branding when you’re shopping for this new fandom.

Just because Harvey owns The Multiverse doesn’t mean he knows what he’s talking about. Most of his good ideas end up as silly songs he sings for his kids once before being lost forever. Whatever’s left, well, ends up here.